For the first time ever, a President of the United States has proposed the total slashing of funds for the National Endowment for the Arts (NEA) and the National Endowment for the Humanities (NEH). This action would also eliminate funds for the Public Broadcasting System (PBS) and National Public Radio (NPR). Thus, the President, in his young administration, has advocated the simultaneous banning of Muslims and Big Bird.

The National Endowment for the Arts represents less than 1/100 of 1% of the Federal budget; and yet the defunding will be a death sentence for many arts and humanities organizations. The obliteration of these programs will barely help Trump fund the Defense Department increases. The $58 billion increase in defense spending for 2018 alone could fund the NEA and NEH for 180 years.

Gone will be NEA funding for a museum that is collecting and displaying the letters, photos and uniforms of soldiers who died fighting in World War I. Gone will be a NEH effort to open dialogues on veterans’ experiences of war with a focus on eliciting their expression on duty, heroism, suffering and patriotism. The list of obliteration of funding also includes libraries; the National Gallery of Art; youth symphonies; creative writing workshops for youth; the Jazz and Heritage Festival in New Orleans and many dance companies.

Art often reaches people in ways that mere words cannot. Art and humanities often provide avenues of personal and societal healing; opportunities to gain perspective on our common humanity; and a vision of what we and other people and cultures experience. Art inspires people to accept the challenge to be more connected to each other as well as to their own potential.

Art matters. Humanities help. If you want to conquer a people you could buy more guns. But you could also deprive them of the ability to know who they are. Destroy their museums (ISIS knew this). Burn their historical documents (Hitler knew this). Cripple their transmission of culture and identity (slave owners knew this). Loot the institutions of faith, making sure to destroy or remove art, and the ornate certificates of baptism and marriage. Desecrate the hand-chiseled tombstones of ethnic minorities like we have seen a rash of recently in America. Leave them wondering who the hell they are, and where they came from, and you will wage war against their humanity.

That is why we must always endow our arts and endow our humanity. We must teach, encourage and assist people in accessing their creativity. We must preserve their self-described, sacred writings and other expressions of art. We must archive their/our tales, myths and legends. If you want to know what the world looks like without the arts and humanities ~ read the front page of the newspaper. A creative act by you today might be your resistance to defunding the NEA and NEH. Now that is a picture that is worth a thousand words! 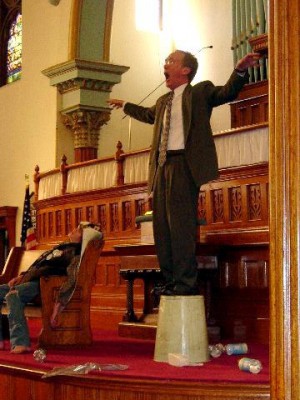